The ICEM - who we are, what we do
Uniting the world's workers

How can workers face up to the might of the global corporations?

That is why more than 20 million workers worldwide are already members of the ICEM, the International Federation of Chemical, Energy, Mine and General Workers' Unions.

The ICEM is a rapidly growing industry-based world labour federation dedicated to practical solidarity. It unites trade unions in its sectors on all continents. Its aim is to become a truly global trade union.

International Federation of Chemical, Energy, Mine and General Workers' Unions

Its main focuses are:

The ICEM organises in a wide range of industries:

Energy
Exploration, production, generation, refining and distribution of all types of primary and secondary energy.

Pulp and Paper
Research, production and conversion of pulp, paper, board, kraft, paper packaging and other paper and board products.


The ICEM membership includes all employee categories within its sectors.

By October 2005, the ICEM represented 389 industrial trade unions in 122 countries. Enquiries are welcomed from other unions in ICEM sectors worldwide.

The ICEM unites workers irrespective of race, nationality, gender or creed. It supports sustainable industrial development. The ICEM campaigns for the highest levels of health and safety at the workplace, and for environmentally responsible industrial products and processes. The ICEM is also committed to the global application of the best possible standards and practices - especially within multinational corporations.

Principal officers of the ICEM 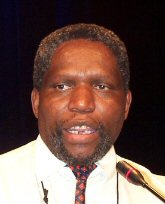 The ICEM promotes modern techniques of information exchange between affiliated trade unions, including computer networking. In particular, it is expanding trade union contacts and cooperation within the worldwide operations of the major multinational companies in its industries.

As a clearing house for trade union expertise, the ICEM draws on a pool of specialists from its affiliated trade unions around the world. Its own staff provide rapid responses to unions' specific questions on, for example, collective bargaining trends, company structures or the health hazards of a new industrial chemical.

The ICEM believes that its policies must be locally "owned" by its rank-and-file membership - not handed down from above. These policies must be relevant to the day-to-day needs of its affiliated trade unions. The ICEM's union-building programmes carefully avoid the creation of client organisations. Its assistance to newly emerging industrial trade unions is on the basis of help for self-help.

While maintaining its global unity, the ICEM has devolved some of its decisions and action to the world's different regions.

Special provisions ensure that women workers throughout the world are properly represented within the ICEM, which runs programmes to meet their particular concerns.

The ICEM issues a range of general and specialised publications, both in print and via the Internet. It also voices workers' concerns within the world media. And its website at www.icem.org is first with the unions' news and views.

The ICEM often makes representations on workers' behalf to national authorities and international bodies. These include the relevant specialised UN agencies, such as the International Labour Organisation and the World Health Organisation.

The ICEM maintains close contact with the trade union movement's other sector-by-sector Global Union Federations (GUFs), with the International Confederation of Free Trade Unions, with regional trade union bodies of all continents and with other organisations campaigning on issues that directly affect its members (for example, the environment and human rights).